Yakub Memon was convicted for his role in the March 12, 1993, Mumbai bomb blasts.

Official sources earlier said Memon will be hanged on July 30.

He is likely to be be hanged in the Nagpur Central Jail, where he is currently lodged, following the rejection of his mercy plea in April this year by the President.

A chartered accountant, Memon, 53, filed his second review petition before the Supreme Court, which dismissed it on Tuesday.

He was awarded the death sentence by a Special TADA Court in Mumbai on July 27, 2007, for his role in the blasts, including arranging finances for carrying out the 13 serial explosions which left 257 dead and over 700 injured across the city on March 12, 1993.

Subsequently, Memon - brother of one of the main absconding accused, Ibrahim alias Tiger Memon - appealed against the sentence in the Bombay High Court, the Supreme Court and later filed a mercy petition with the President, followed by a review petition, and then a second review petition.
Kannur: Two CPM workers were killed and four others injured when a country bomb exploded in the politically sensitive Kannur district on Saturday June 6.

It is said that the blast occurred while some persons were manufacturing bombs at Kallikkandi in Panoor, where tension is prevailing between CPM and BJP workers.

The deceased have been identified as Subeesh and Shaiju.

The two seriously injured have been admitted to Kozhikode Medical College Hospital, police said. The other two are at Thalassery Co-operative Hospital.

The explosion occurred in an outfield in Panoor under Kolavalloor police station limits.

The police said material used for making bombs were recovered from the spot. "Police officials have been sent to the spot and searches are being conducted," Thalassery Rural Superintendent of Police Prateesh Kumar said.

Bomb squad is also at the site.

Meanwhile, Kerala Home Minister Ramesh Chennithala said that the CPM was behind the incident.

"The deceased and the injured belong to the party. The police have found bombs from the house where the explosion happened. CPM should oust such people from the party," Chennithala said.

He said the Kannur DIG will probe the incident.

Taking a serious view of the incident, the Home Minister has also asked State DGP T.P. Senkumar to conduct a probe into the blast.

The incident has triggered concern as it came in the background of efforts to constitute peace committees in the area following frequent BJP-CPM clashes.

RIYADH (Saudi Arabia): A blast ripped through a Shia mosque in eastern Saudi Arabia on Friday, authorities said, in what an activist said was a deadly suicide bombing.

The kingdom's Eastern Province has been hit by previous attempts by Sunni extremists to foment sectarian tensions with its large Shia community, including a deadly shooting in November.

The interior ministry said a large explosion hit the mosque in Kudeih in Shia-majority Qatif district during the main weekly prayers.

An activist said at least four worshippers were killed and others wounded, and news websites in eastern Saudi Arabia posted photographs of bodies lying in pools of blood.

Qatif hospital issued an urgent call for blood donations after the attack and called in off-duty staff to cope with the high number of casualties, the activist said. 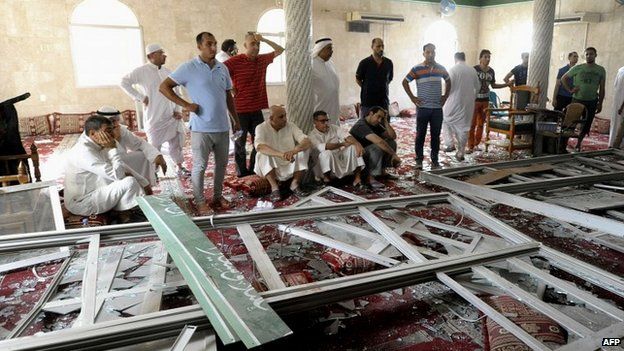 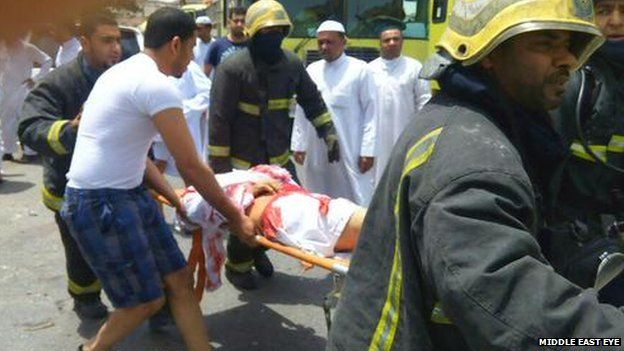 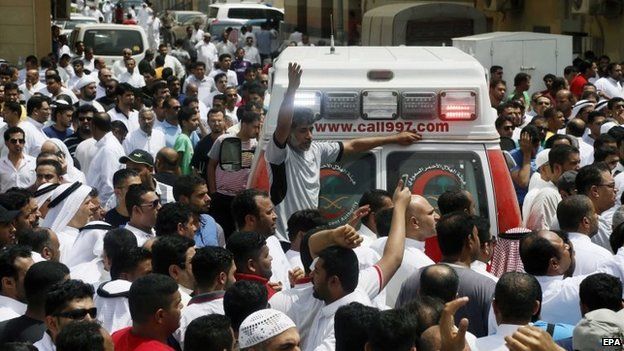 An interior ministry spokesman said an investigation has been opened and more details of the explosion would follow.

Saudi police have made a string of arrests in recent months of Sunni extremists suspected of plotting attacks aimed at stirring sectarian unrest in confessionally divided Eastern Province.

Most of Saudi Arabia's minority Shias live in the east, where they have long complained of marginalization in the Sunni-dominated kingdom.

Last November, gunmen killed seven Shias, including children, in the eastern town of Al-Dalwa during the commemoration of Ashura, one of the holiest occasions of their faith.

Four men carried out the attack after killing a man from a neighbouring village and stealing his car to use in the shootings, the interior ministry said.

Last month, the interior ministry said it had dismantled a 65-strong cell with suspected links to the Islamic State jihadist group in Iraq and Syria that was implicated in a plot to "incite sectarian sedition" through similar attacks.

Since 2011, protests and sporadic attacks on security forces have occurred in Shia areas, leaving about 20 Shia youths dead.

Kabul:The blast happened outside a bank where government staff and military personnel were collecting their salaries, the region's police chief said.

No group has said it carried out the attack, and a spokesman for the Taliban said it was not involved.

Shahzheb Jillani in Kabul says it is the largest attack in Jalalabad in many months.Children are said to be among the victims.

Police say the bomber attacked the bank on a motorcycle.No group has yet claimed it carried out the attack on the New Kabul Bank
One eyewitness, Jaweed Khan, said: "I saw many people, dead bodies and injured people on the ground.

"Ambulances arrived very late, and many people died of their wounds."

Police said another bomb was discovered nearby, and was destroyed in a controlled explosion.

Another blast was also reported outside a shrine in Jalalabad on Saturday morning. There are no reported casualties.

Three people died in an attack in Jalalabad on April 10
The city has been a repeated target for the Taliban in the last year.

On 10 April, a Taliban assault on a Nato convoy near Jalalabad airport killed three civilians.

After years of Nato intervention, the challenge of fighting extremist groups is now solely in the hands of Afghan forces, but a new report indicates the number of troops and police is falling and creating new security risks.

Only a few thousand Nato troops remain in the country, largely in training roles, after their combat role ended in December.
Beijing: China`s military will take "decisive" measures if there is a repeat attack by Myanmar forces on Chinese territory, a senior military officer said after a bomb from a Myanmar aircraft fell in Chinese territory and killed four Chinese people.


Myanmar government forces have been battling rebels on the border with China since last month and China has urged Myanmar to "lower the temperature".

But Myanmar denied that any bomb from its forces had fallen in China and said the rebels might have fired into China to create "misunderstanding". The rebels do not have aircraft.

China`s air force has already dispatched aircraft to patrol the border and step up protection of China`s airspace. China has also summoned Myanmar`s ambassador to complain about the bombing.

Fan Changlong, who is a deputy head of the powerful Central Military Commission, said Myanmar air force aircraft had crossed the border "many times" recently, China`s defence ministry said in a statement late on Saturday.

"The Myanmar side must recognise the seriousness of the issue, seriously deal with this incident, punish those who caused the trouble, apologise and pay compensation to family members, and explain themselves to China," Fan was cited as telling Myanmar`s military in an emergency telephone call.

Myanmar must take strict steps to rein in their armed forces to ensure no repeat of such incidents, he said.

"Otherwise, China`s military will take resolute and decisive measures to protect the lives, property and security of China`s people," Fan said, without elaborating.

Tens of thousands of people, many of them ethnic Chinese, have fled the fighting in northeastern Myanmar`s Kokang region into China.

Myanmar has said Chinese mercenaries were fighting with the rebels, and it has urged China to cooperate to prevent "terrorist attacks" being launched from Chinese territory.

China has denied that any attacks into Myanmar have been launched from its territory.

The rebels are from a group called the Myanmar National Democratic Alliance Army, which is led by ethnic Chinese commander Peng Jiasheng.

The MNDAA was formed from remnants of the Communist Party of Burma, a powerful China-backed guerrilla force that battled the Myanmar government until it splintered in 1989.

The group struck a truce with the government which lasted until 2009, when government troops took over their region in a conflict that pushed tens of thousands of refugees into China`s Yunnan province.

China and Myanmar share a 2,000 km (1,250 mile) border, much of it remote and hard to access.
Patna: Three people, including a woman, a police constable and an undertrial prisoner were killed and more than half a dozen injured in a bomb blast in a Bihar court Friday, police said.

According to an official at the chief minister's office, the union home ministry has sought a report about the incident from the state government.
SANAA: A car bomb exploded outside a police college in Yemen's capital Sanaa early on Wednesday, killing and wounding dozens of people, police sources and residents said.

Ambulances were transporting casualties away from the scene of the blast, which appeared to target a group of students outside the college, some of whose bodies were later seen lying in the street, witnesses said.

The explosion was heard across the city and a large plume of smoke was visible in the area of the college.

Photographs purporting to show the aftermath of the explosion, distributed on Twitter, showed the mangled wreckage of a vehicle and bloodied people lying prone on a pavement, but the pictures could not be immediately verified.

Security in Yemen has diminished since a 2011 popular uprising that led to a change of government and splits in the army. Al Qaeda in the Arabian Peninsula (AQAP), one of the movement's most active wings, has staged a growing number of bombings and shootings across the country.

On January 1 a suicide bomber killed at least 26 people at a cultural centre in the central Yemeni city of Ibb in an attack that appeared to target the Houthi Shi'ite Muslim militia that seized the capital in September and advanced into other areas.

Bengaluru City Police has intensified security deployment in and around M.G. road with one policeman deputed at every 100 meters to keep a watch on any untoward incidents till New Year celebrations are over.

Deputy Commissioner of police (Central Division), Sandeep Patil said the deployment of police personnel are at places like M.G. Road, Brigade Road, High Grounds and in and around Vidhana Soudha. The police are also putting up 10 watch towers in the surrounding areas of M.G. Road along with plain cloth policemen deployed for patrolling the area.

The city police have also announced a cash reward of Rs. 10 lakh for any valuable information about the perpetrators of the bomb blasts. People can call at 9480801101 to inform on any suspicious activities, Mr. Patil said.
Subscribe to this RSS feed